You know gluttony from people with eating or gathering up money. It does not matter how much you have, you want more. And so I do. I want more to read. I do not do the skimming and calling that reading. I pick up one and read each chapter, sometimes a few times, to make sure I get it.

But like the gluttony of, for food, I do not finish them. If the book does not satisfy me I will toss it aside. That is about to happen to The Drawing of The Three, which is surprising given how I was sucked into On Writing there was a lot of difference between the two books, but one of them just did not do it for me. In contrast, Naked Statues, Fat Gladiators, and War Elephants which is a library book, and (I hope, for Christmas, if not I will buy a copy, hint hint) It is really fascinating.

In my defense, I do not buy all those books. I go to the library, and the Multnomah County Library is famed for being a great one. Well, I expect everyone likes their library a lot and think it is one of the best.

I have some books to read. More later. 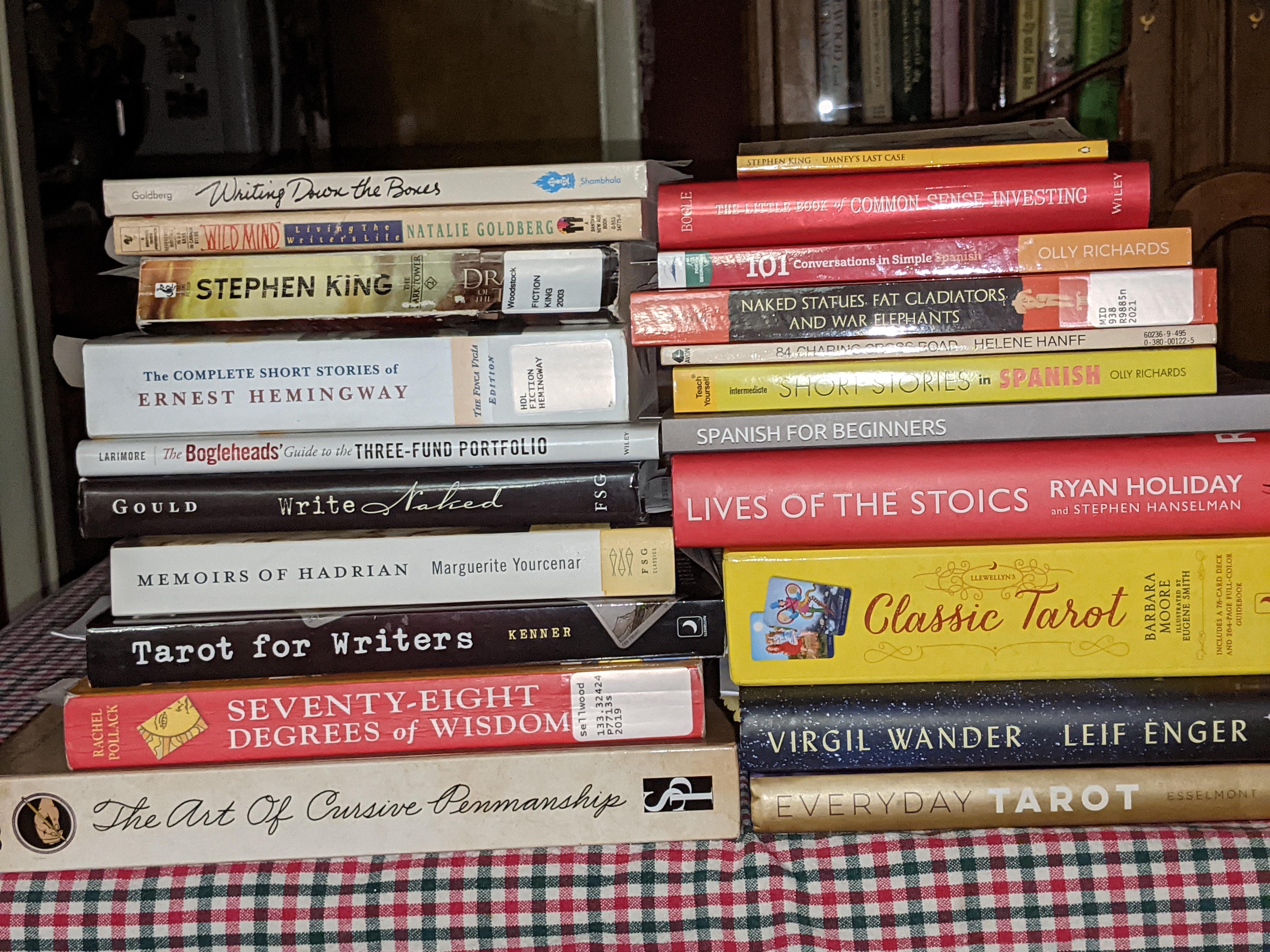 Get up. And return to a returning routine. Morning Pages. Again. These are part of my routine since April 2015. Not all the time. Not in September of 2028. Not in November 2021. For the most part, I have kept up that routine for seven years. Unlike drinking coffee, which I have kept up since 1973, or was it 1972? When I took it black, no sugar. No, I did not like it that way when I started. But I knew that I would come to like it that way and I would be able to enjoy it even when there was no sugar available. Like waking up early in the morning, with the sun in summer and in the dark of winter. I do not know when that started. I was up for the TV Stations coming on in the morning. 6:00? That was the way of TVs in our early days.

Now I get up. And the day is mine to determine. This is the way retirement works. You get to make your own routines. If you have yet to retire, if you have not retired, that is my advice for you. Figure out what you are going to do. Sitting around and watching TV is a terrible way to spend your time.

One of my personal issues is being interested in too many things. But I “get into” something and I go all in and learn as much as I can about it. I am good at that, researching something. And then I do whatever it is for a few years. Then another thing catches my attention and I am off onto that. I learn a lot about whatever it is.

You realize, I hope, that I am talking to myself here. As I figure out the things that I will continue to do for as long as I am alive.

I think, I Think, I am figuring it out now. We will find out.

Ron A wrote about his wife and her time Going through her mother’s things. And bringing home more and more things to be gone through later. Your house and garage are filling up.

You still have room for more. That sounds good to me. My wife spent a solid nine months of life and 18 months of calendar time going through her folks house. Our upstairs, our garage, a large portion of the basement are all filled. My wife is going through it all now. It will happen, your wife will go through everything she is bringing home now. She will go through it when she is ready. My only advice to you is: find a secure storage unit and get that for her. It is the shits when someone breaks into it and steals your stuff.

All of, as near as I can tell, all of my One Typed Page items, the one I have typed, as online. I get my daily-ish page up there before you see them. As soon as I finish finish typing them, I photograph them and email in here and copy to myself. Then an OCR program turns the paper into something ready for spell checking and putting online. Why do that?

“Got me” was my first answer to myself. I like having a corrected version available and it is searching, Searchable too. I use Word Press like Daniel does. And gee, with almost 250 posts I am sure I have over 50,000 words there. Another book?Yeah, right. Another book about “I have nothing to say…” At least when someone goes through my things (years from now, I have dodged death three times so far, another six to go) they can just delete the stuff.

Do you remember what you were thinking at 5:00 last night? Those thoughts are just so slippery. It takes no time at all for them to be gone. What is the use of thoughts?

Yeah, I am starting to drift along here. More later.

Wandering around, trying to think of what, something to type. It might, just might, to sit down and put your fingers on the typewriter. Then anything that comes to mind can be typed. Right now. It is not like I am in Belize. That was the destination of friends who posted (on Instagram) one of two passports and two beers. They were on their way at that time. Now we have a pair of feet and a pool. What would I do with a pool anyway? It is way too cold here where cold is in the Os. Random thoughts

It is an upgrade, no no, Is it an upgrade when you switch from some 70s typewriter made of plastic to a 50s era Royal? To go from one with tab stops to one without because you do not need them? What is “upgrade” in the typewriter world?

I had forgotten how easy it was to “upgrade” some software. Where “some” is something made by people who care about a product for something besides money. Wikimedia Foundation being the source of my happiness. They need to upgrade because of the software has to keep ahead of the foul guys. But jeez, the upgrading was so simple, I had forgotten what it was like. They did not request any money, again. Here is the course for the software. Have at it.

I gave them money anyway. Do not ask, well they do actually via Wikipedia, one in a while. There. And if you do not give to them there, well that is OK. You can still use Wikipedia. Which I do a lot. Was it Pliny the Younger or Pliny the Elder I wanted to refer to? They had articles on both. It was the younger I was after. (Yes, I spelled it as Pliney, not correctly as Pliny.)

A bit of time away from the typewriter and I have lost my thought stream. Off the train of thought goes without me.

I will catch another one tomorrow. Until then, enjoy.

“It is not that we have a short time to live,
but that we waste a lot of it.”
— Seneca

Over 2,000 years and it is still true. We do not seem to be getting better at things, things where we need to learn them for ourselves.

How do you get a seat at the coliseum? 50,000 people could watch a gladiator game or whatever they put on yet there were 1,000,000 people in the city. They had to do something. And this is something where the emperor paid for it all. How did they bring order to it so people could get in?

They had tickets. Wood, clay, but here is the magic part – to my mind your ticket was marked with a gate number, a row, and a seat. That is just like what is used for modern tickets. These Romans sure had a lot of things figured out.

If only we could figure out a way to transmit how they, or at least some of them, knew how to not waste time.

I am certainly among the group of people who waste time. Lots of it. All I seem to have learned is to not complain about life being too short.

Though that could be because I have escaped death at least three times, so far. So I have gifts in abundance of life.

Now if I would just quit wasting it.

Came oh so close to not doing a typed page today. So very close. But I woke up with an idea and I started in on it and, aside from going to the dentist and coming home with a numb mouth, it seems like I have it complete. Too bad it has no worth to anyone except me and a couple of friends who I told about it.

Maybe I should just roast more coffee. We enjoy that.

About My Typed Page

I try to type out a page every single day. Or maybe a half or quarter of a page.

This is a collection of them. First drafts. Not a lot of thought, just whatever my fingers and a typewriter agree on.